Longstanding DiGiCo Venue Upgrades with Quantum7
"One of the biggest things with the Q7 is that it brings a lot more power to the game."
1 February, 2021 by
GerrAudio Distribution Inc., Peter James

GUELPH, ONTARIO :  Given that River Run Centre has long been a  DiGiCo-equipped venue, adding a Quantum7 desk to their audio arsenal wasn’t a difficult call to make.

The Guelph, Ontario-based performing arts centre purchased their first DiGiCo in 2010, before DiGiCo became a constant on the technical riders of both international and domestic touring acts. “At that time, we were one of the first venues in Canada to have an SD7 permanently installed,” says Dave Horner, River Run’s Supervisor of Technical Services. Since then DiGiCo has become River Runs go-to mixing platform. 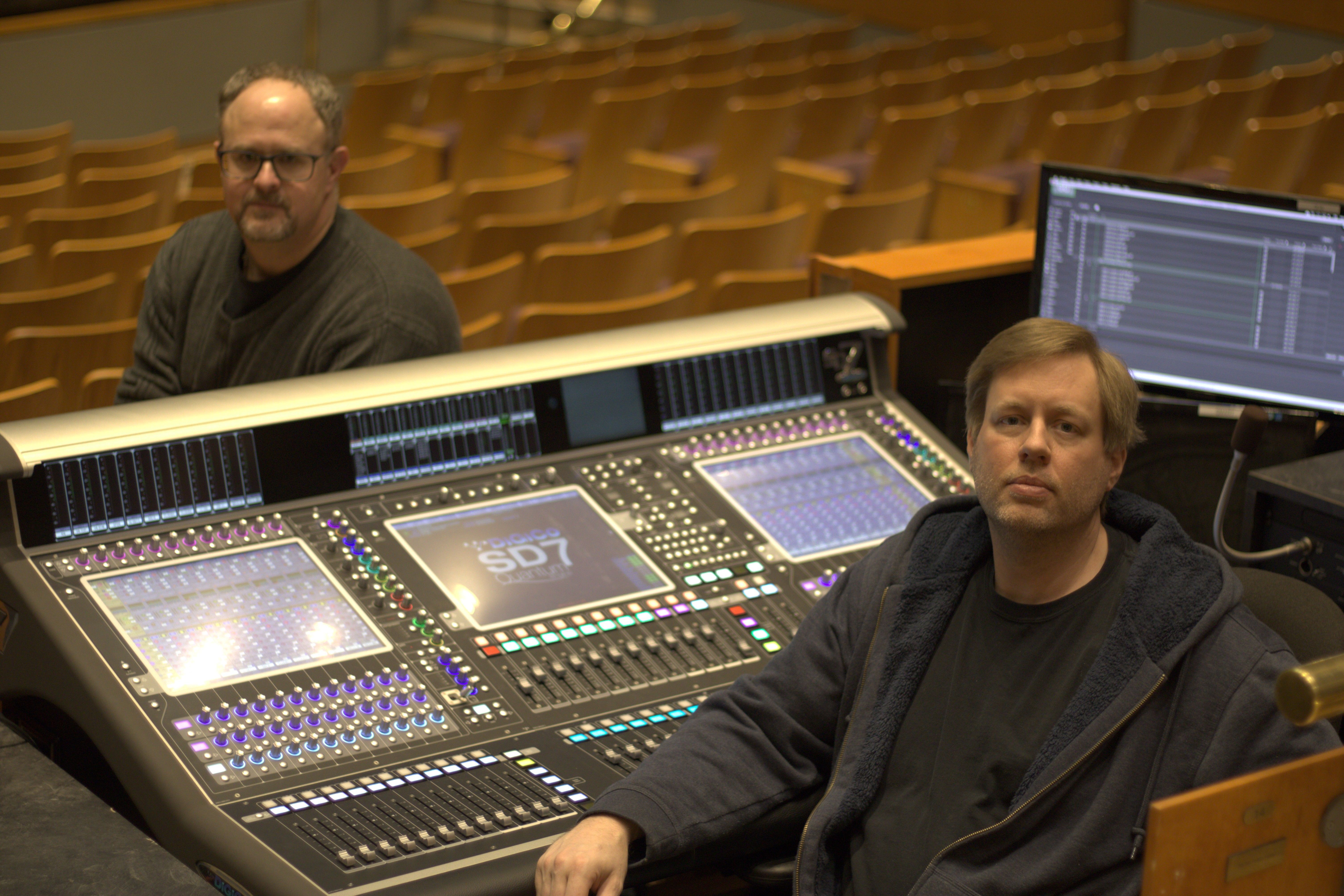 The SD7 was their first foray into digital consoles; replacing another long-serving desk, a Midas XL4, which served as the FOH console for their main 786-seat theatre until 2019 (with the XL4 taking over in monitor world). The latest addition of the new Quantum7 was initially slated to take over monitors however Horner and company decided to “put their best foot forward” and install the Q7 at FOH and move the SD7 to monitors. River Run’s smaller, but equally multi-functional performance space, the Studio Theatre, is also equipped with a DiGiCo SD9.

Located in the city’s historic downtown area, River Run was imagined as a community arts hub, and built near the spot where John Galt, who established Guelph in the name of the Canada Company and was a novelist, dramatist, and poet in his own right, symbolically felled a tree to commemorate the city’s founding in 1827. In essence, River Run is a reflection of Galt’s belief in the importance of the arts as ‘elements that nourish and enrich the mind and heart’, as Gloria Dent puts it on River Run’s website.

Owned and operated by the City of Guelph, the decidedly multi-purpose venue has fulfilled that mandate since opening in 1997 – presenting concerts, theatrical productions, dance performances, community and corporate events of all descriptions. In all, River Run hosts roughly 100 touring shows and 300 community-based events annually all of which Horner advances, and that, in doing so, “Often getting right down into the weeds,” he says, chuckling.


In addition to their extensive use of the SD7 and SD9, their ongoing reliance on DiGiCo is fuelled by what they’ve discovered about both DiGiCo as a company and their consoles over time. “The XL4 is one of the best-sounding consoles ever,” Horner explains. "So, we had high expectations when we went out looking for a replacement.” In addition to sound quality, those expectations took in overall functionality, flexibility, and what desk would best serve their needs long term. “We didn’t replace the XL4 because we were having issues. I mean, it was our monitor desk for almost another decade after we purchased our SD7 in 2010.”

One of the factors driving the decision to initially purchase the SD7 (and later the Q7) was a comprehensive renovation that increased the amount of accessible seating in the venue but diminished space for the FOH mix position. “Certainly, footprint was part of the conversation, but the real discussion was about matching the XL4’s quality sonically.”

Moving from an analog A-lister to a digital platform – at a time when many in the industry viewed digital control surfaces as minor league players – River Run didn’t want to step backward in any way, Horner adds: “sonically, performance-wise, or from a functionality, channel count, or integrating it into the existing systems point-of-view.”

At the time, DiGiCo was well ahead of the game in terms of sonic quality, flexibility and longevity. “When we bought the SD7 there were other consoles that seemed to be number one on technical riders. But our use of the XL4 and the needs of our community clients partially drove us towards the SD7 because it had enough AUX outputs and the flexibility to allow us to do what we’d been doing with the Midas,” DeRuiter puts in.

Similarly, and more recently, the Q7 delivers the necessary functionality required for any size of production. Functionality that, owing to DiGiCo’s determination to support their end-users’ in the long term, can be seamlessly integrated with their existing SD7 – and offer a return on investment few other manufacturers can provide.

While they have yet to do so, the ability to upgrade a 10-year-old console to include the latest ‘Quantum’ features from DiGiCo is another selling point in DiGiCo’s favour. In a landscape where virtually any new technology you purchase depreciates almost immediately: “To invest in a console and then, ten years on, be able to update it, that’s a real benefit and great thing for a company to do.”

DeRuiter puts it this way: “When we bought the SD7, DiGiCo’s SD racks had just come out. Now they’ve gone to 32-bit processing cards that you can upgrade to, but you can still use the 24-bit cards. You don’t have to invest in an entirely new rack; you just upgrade the cards themselves.”

As for the Q7, Andrews and DeRuiter point to the rich functionality and options provided by DiGiCo’s Mustard and Spice processing racks and the Q7’s True Solo function. “True Solo is one of the things I especially like for monitors,” DeRuiter says. “Normally, when you’re soloing a track, you’re hearing what the musician is, but without the processing. With True Solo, you’re inserting yourself onto their bus and hearing what they'll hear, exactly; EQ, processing, everything.”

Q7, in conjunction with the SD Racks, allows the venue to handle anything a given show throws their way – be it a straight-up concert or large corporate/community event incorporating substantial video components and requiring user-friendly multi-track recording functionality. “The integrated 48-channel UB-MADI connectivity allows for simple connections to an external DAW, and I know Tom and Luke are making good use of that,” Horner says.

“One of the biggest things about the Q7 console is that it brings a lot more power to the game. Even just booting it up, you’ll see how much faster and responsive it is,” says Andrews. And River Run may soon be adding to their existing compliment of DiGiCo gear – by implementing Waves on all of their desks and potentially upgrading the SD7 to Quantum or adding another console to the mix for monitors in the Studio Theatre.

While all of these benefits and the rock-solid reliability of the desks play into River Run’s ongoing use of DiGiCo, the reliability and responsiveness of GerrAudio is also a major determining factor in the purchases they’ve made over time.

“Of course, DiGiCo’s consoles are fantastic, but a really big piece of the puzzle for us is the support we’ve received from GerrAudio over the years. That’s part of why we continue with DiGiCo and the other products we go to GerrAudio for, like DPA microphones and Clear-Com. Bob Snelgrove and his team have been amazing, Geoff Maurice and Ian Robertson are always there when you need them. They answer when we call and if we need something, we’ll have it the next day. And, increasingly, that level of support is truly unique, and we value it.”

Anyone working in production knows that what proves equipment is high-quality isn't that it works the first time out, but that it continues to deliver every time out - a quality GerrAudio and the lines they represent share. “With some companies, the sales team does a great job representing the product initially, but three years down the road, the support isn’t quite there," DeRuiter says. "With GerrAudio, it always is.”