TORONTO:  Bespoke Audio Visual has always emphasized providing services that are custom-tailored to the unique nature and needs of every event and client they work with.

In doing so, their mandate is to consistently look for new and unique ways to bring people together. And although the Coronavirus pandemic has put in person events on hold indefinitely, Bespoke AV has applied their wealth of industry experience, and leveraged their substantial inventory of Clear-Com technology, to provide a means of mounting virtual events of any description that allow for a depth of connection and interplay well beyond that offered by, for example, your average Zoom meeting.

For the Toronto-based firm, an event isn’t just a gathering, but an opportunity for those involved to connect, engage with each other meaningfully, and further their goals individually and/or professionally.

During the pandemic, much has been made of the disappearance of live performance events, but the pandemic has also had a substantial impact on the corporate world.

Bespoke AV continues to cater to this industry, which relies heavily on a wide range of in-person events for their success, by providing technology solutions that offer a high degree of customization beyond the average concert.

“Customization is definitely a core tenet,” says Mike Wilson, Chief Operating Officer and co-founder of Bespoke AV.  “It is baked right into our name; Bespoke AV. Every one of our events is custom tailored and we’re not a cookie cutter organization. Our challenge (now) is to encourage clients to come out of the last few months and get back to putting on well-staged, well thought through events. Even if they’re not coming into our studio space, we’ve outfitted all of our control rooms with Clear-Com products that are allowing us to connect to everyone. Our key focus is to increase the quality of the message our clients are putting out. Our clients are very thankful that we're approaching this in the way we are, by taking their normal needs, goals, and wants and accommodating them in this locked down environment.

While many firms have pivoted to virtual solutions in recent months, Bespoke’s offering is undoubtedly one of the most elegant and interactive created thus far. “Very early in the process we saw the writing on the wall and knew we wouldn’t be doing in-person events for some time, so we came up with a vision for how we could continue to work, effectively, in the virtual space,” says Technical Manager, Andrew Bernacki. That work, he adds, is similar to their pre-pandemic offerings and encompasses events ranging from corporate/government meetings, to press conferences and conventions, and even gala dinners/awards shows.

The interest in this innovative approach has proved attractive to Bespoke’s existing client base and new clients, Wilson explains: “We've had some outreach from a number of virtual event platform companies, where they provide that virtual event experience, but are lacking a production partner to get the content itself into their platforms. So, we’ve been able to partner with them and that’s a great fit for us because we are always looking to provide a higher quality, more effectively branded experience.

As a partner, Bespoke AV has a great deal to offer. Webcasting for government applications, major financial institutions and others has been a key part of their business, but Wilson, Bernacki and their colleagues went into high gear to develop a means of upping their game in this respect as soon as the need became apparent. “Our clients essentially came to us and said, ‘Obviously the show we planned isn’t going to happen, but we still want to do something – what can we do?’ So, from there we distilled that down to what we have now,” Bernacki says.

That solution relies on remote production control rooms, which are able to communicate with remote participants, producers, other control rooms, and even in-person event sites, all facilitated by a Clear-Com Eclipse matrix intercom system. That system allows each room to produce a managed, high quality end product that combines the collaborative, real time elements of live in-person events with the remote viewing experience required by these unique times. 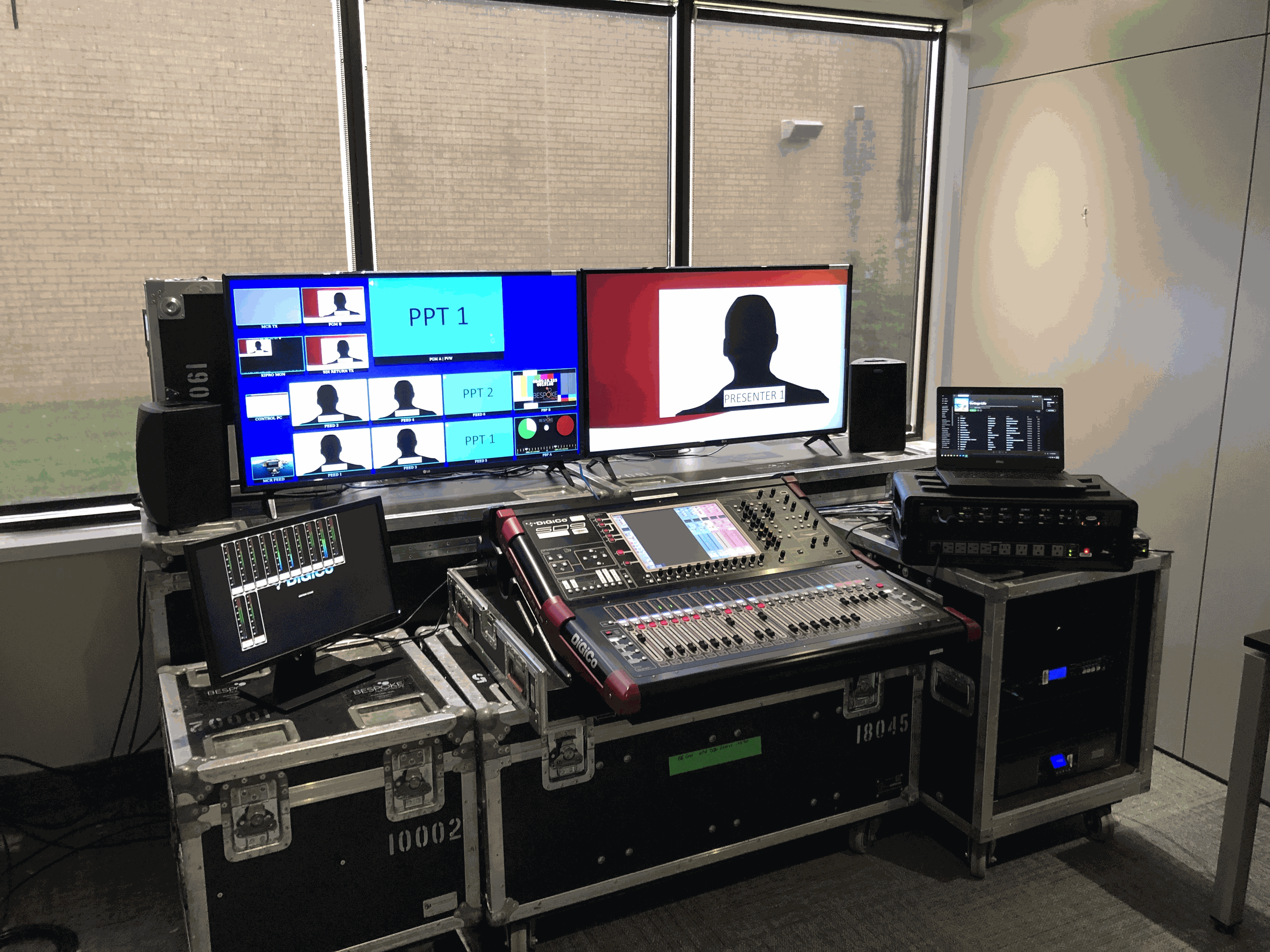 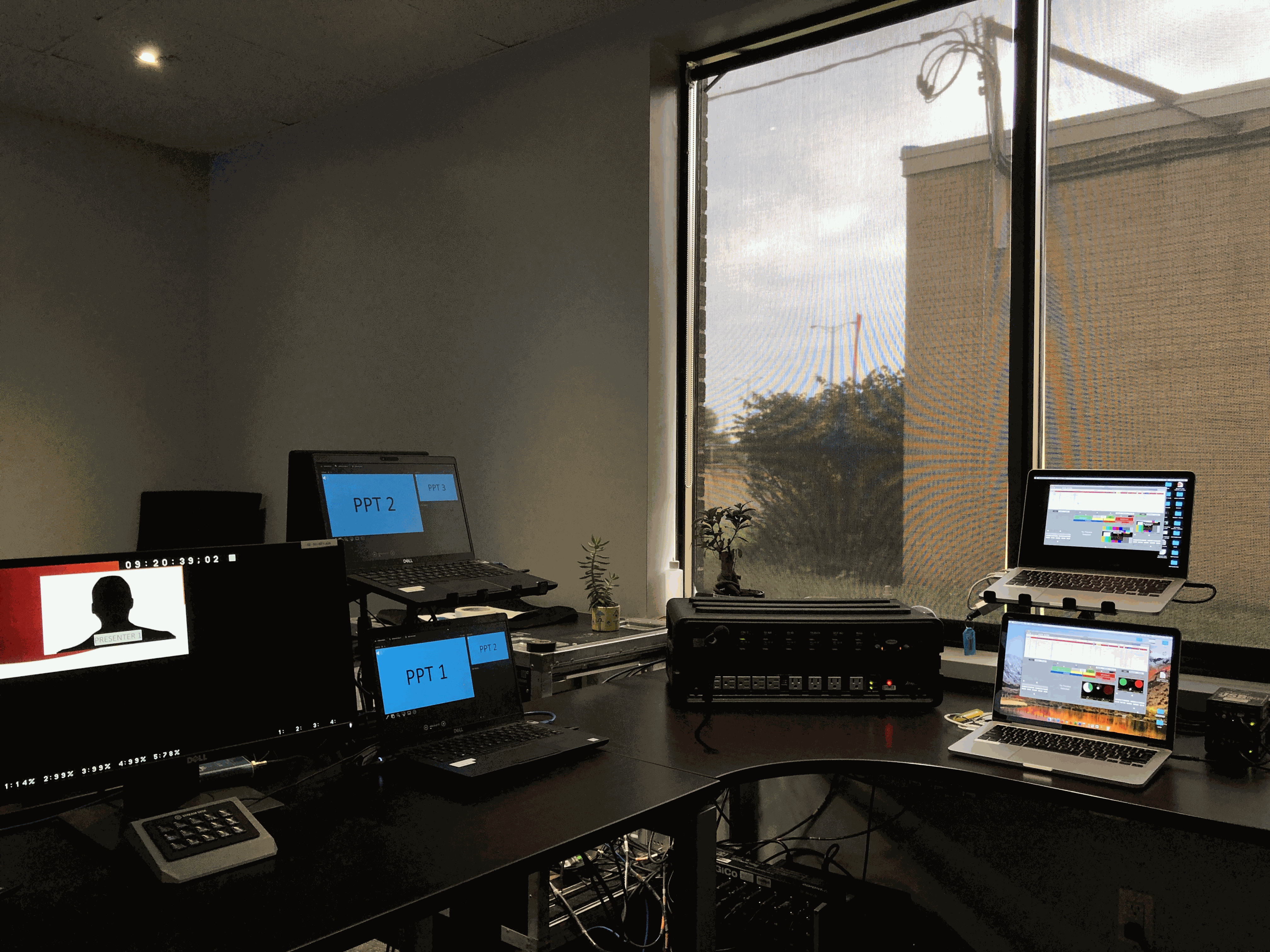 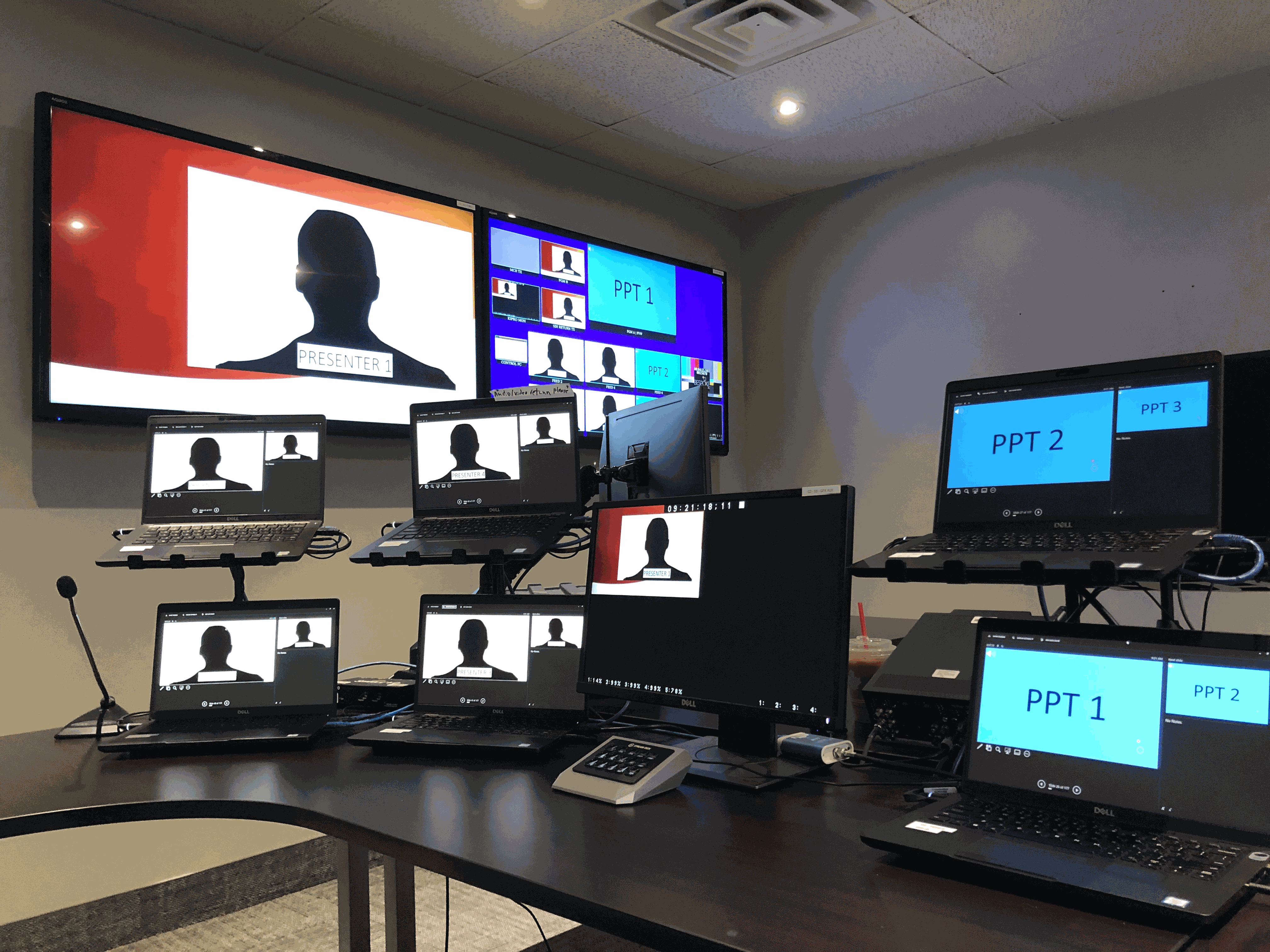 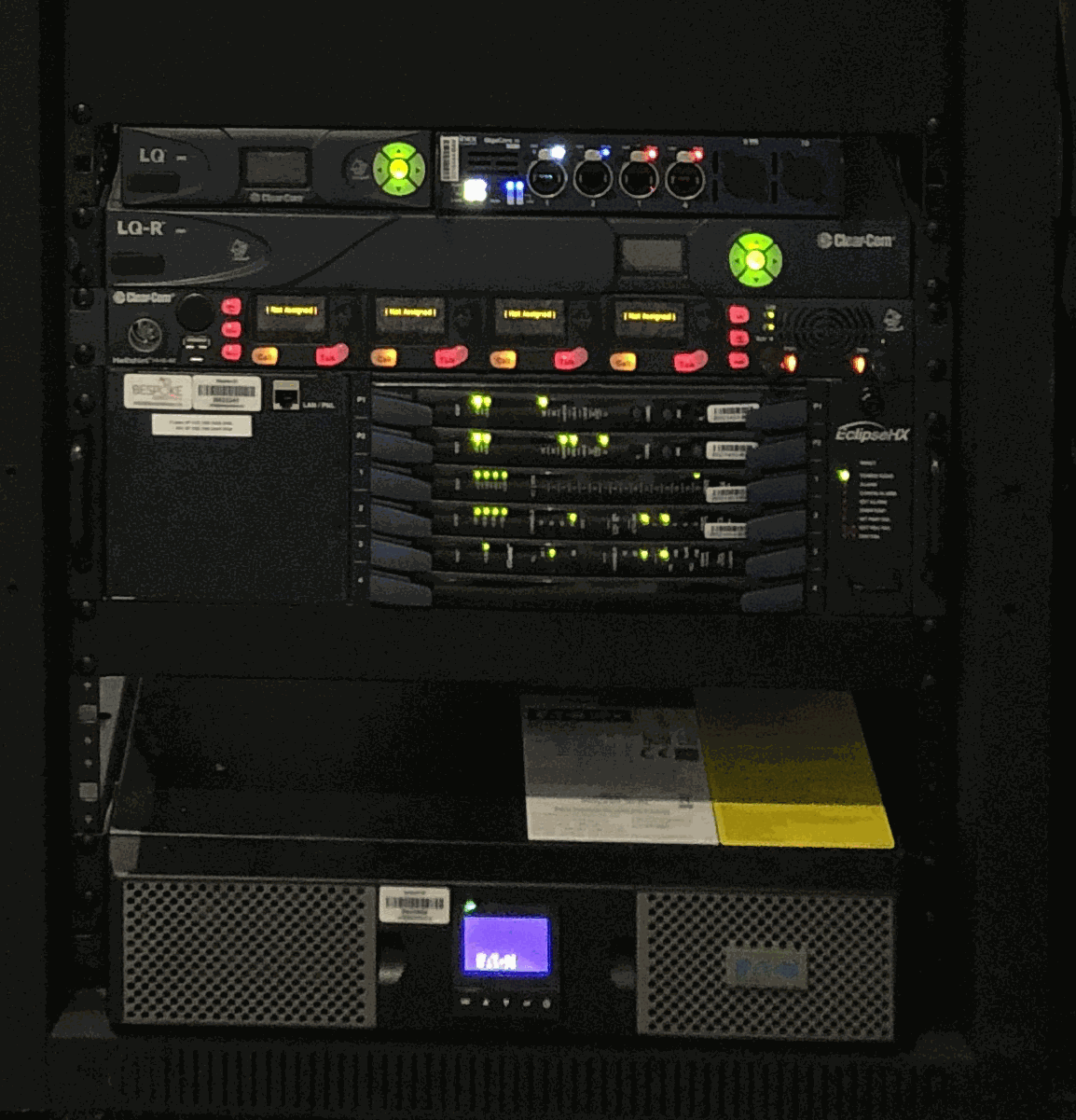 The intercom mainframe consists of a Clear-Com Eclipse HX-Delta (“the ‘brains’ of the system,” Bernacki says), with one E-IPA-HX IP card (64 Ports). “That’s the most important card in our system. It provides connectivity to our AES67 Iris Panels, AES67 FreeSpeak II IP Wireless Transceivers, Agent IC Mobile App connectivity, and the LQ Box Connections we use for HelixNet and other LQ interfaces. We also have IVC Connections for any V-series panels we need to deploy outside our facility over the Internet, and an A-MVX 16, 16 Port Analog Card as our analog Audio I/O for smaller control rooms that don’t have Dante functionality.

Additional Clear-Com products include an LQ-2W2, which acts as a bridge between the HelixNet Digital Partyline System and the Eclipse Matrix System, an LQ-R4W8 as a SIP Phone Bridge for the Eclipse, which provides 8 phone lines for less technically inclined producers to get into each control room’s Party Line, and a Dante-64 card for sending and receiving audio from the multitude of Dante enabled devices throughout the control rooms.

For Bespoke AV, an apt way to describe this innovation is a natural, if virtual, extension of their work, Bernacki says. “The big pivot, for us, was moving from one-directional webcasts with a time delay to a two-directional, remote presentation experience with low latency – and one that incorporates a virtual audience so everyone experiences the show in real time. With fluent communication between operators, producers and talent everyone can interact with each other, on stage and behind the scenes, just like an in-person event, and the system can be customized as needed depending on the show.”

As of September 2020, Bespoke AV has completed five control rooms in their Toronto office, but there are more to come, Bernacki adds: “By the end of September, we’ll have another space built out in our Toronto office. We can bring in hosts and/or participants via Zoom, or the platform of their choice, mix that into a show and then send that out to its final distribution point. We’re a very agile company,” he continues, “and this is a highly customizable offering, so if you don’t fit into one of those control rooms we’ll build whatever works for your show in the same way that we would in any given room where an event was being held.”

It all depends on the type of event and the level of experience and interactivity a given client requires, be it offering a more effectively branded and polished experience than your average online meeting, “Like a university on-boarding new students, where they just need us to inject PowerPoint slides and mix in a presenter from a remote location,” Bernacki continues, to a full-on gala dinner and awards show that, although mounted entirely remotely, involved a level of connectivity rivalling the real thing.

“Every virtual table was its own, separate call where the people at that table were able to talk to one another. Then we piped in other participants to each of those as necessary and our hybrid event studio space acted as the main stage. When someone at a table won an award, we took video and audio from that, broadcast it to the other participants, and also allowed those on stage to interact and have an ongoing conversation with the audience.” The producer for that event didn’t stop there, Bernacki adds, explaining that catered meals were sent to the homes of each of the people in attendance!

In another application, he continues, Bespoke AV deployed individual video displays (one for every 50 virtual audience members) for the host, so they could experience and react to the audience’s facial expressions and feedback in real time. “That made a huge difference to the host’s energy and comfort level and, I think, made for a better experience for the audience as well.”

Although Bespoke AV relied heavily on their existing inventory of technology, Bernacki cites the company’s relationship with GerrAudio as integral to the implementation of the system. “I’ve been dealing with GerrAudio since 2013 and when I moved to Bespoke AV in 2016 and was tasked with building up our inventory of all things audio I really couldn’t see going to another distributor or vendor. GerrAudio is top notch. The reality is, aside from Clear-Com being a superior product, the after sales and continuing support we get from Gerr made Clear-Com, and by extension, GerrAudio, a no brainer choice for us. That level of service always seals the deal for me. GerrAudio is my favorite distributor to work with, not only because they’re lovely people, but because they’re personally invested in our success.”

Going forward, Bernacki notes, that relationship will continue to be key to Bespoke’s ongoing refinement and expansion of their systems in their effort to increase the degree of customizable branding and interactivity for both remote applications and, when circumstances allow, the eventual inclusion of this offering as a means of enhancing more traditional live events.

“I think the engagement is going to be much greater coming out of this,” Wilson concludes. “I think every live event will have some sort of streaming component and we'll see more ‘second screen’ situations where, even if you’re attending an event in person, you'll likely still have to connect with some colleagues virtually. With this Clear-Com product, we’re able to give our clients a means to communicate using simple mobile apps and standard headphones, which has been earth-shattering for them. It also helps them to better understand how we used to communicate, in private, to make the show work. Now that they’re getting a peek behind the curtain with a system that is so user friendly, it really helps them understand all of the value of what we bring to the table that they may not have been able to see before.” 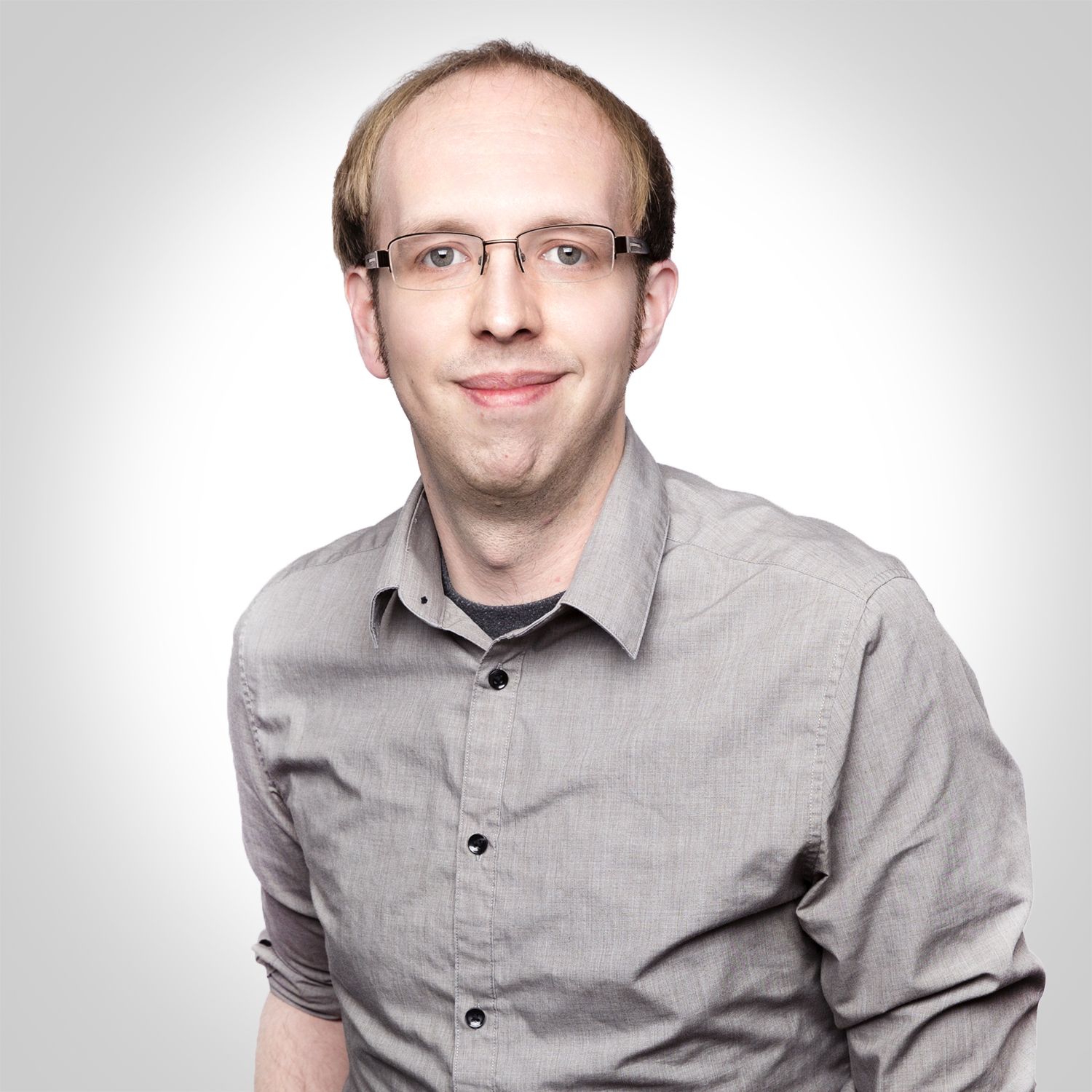 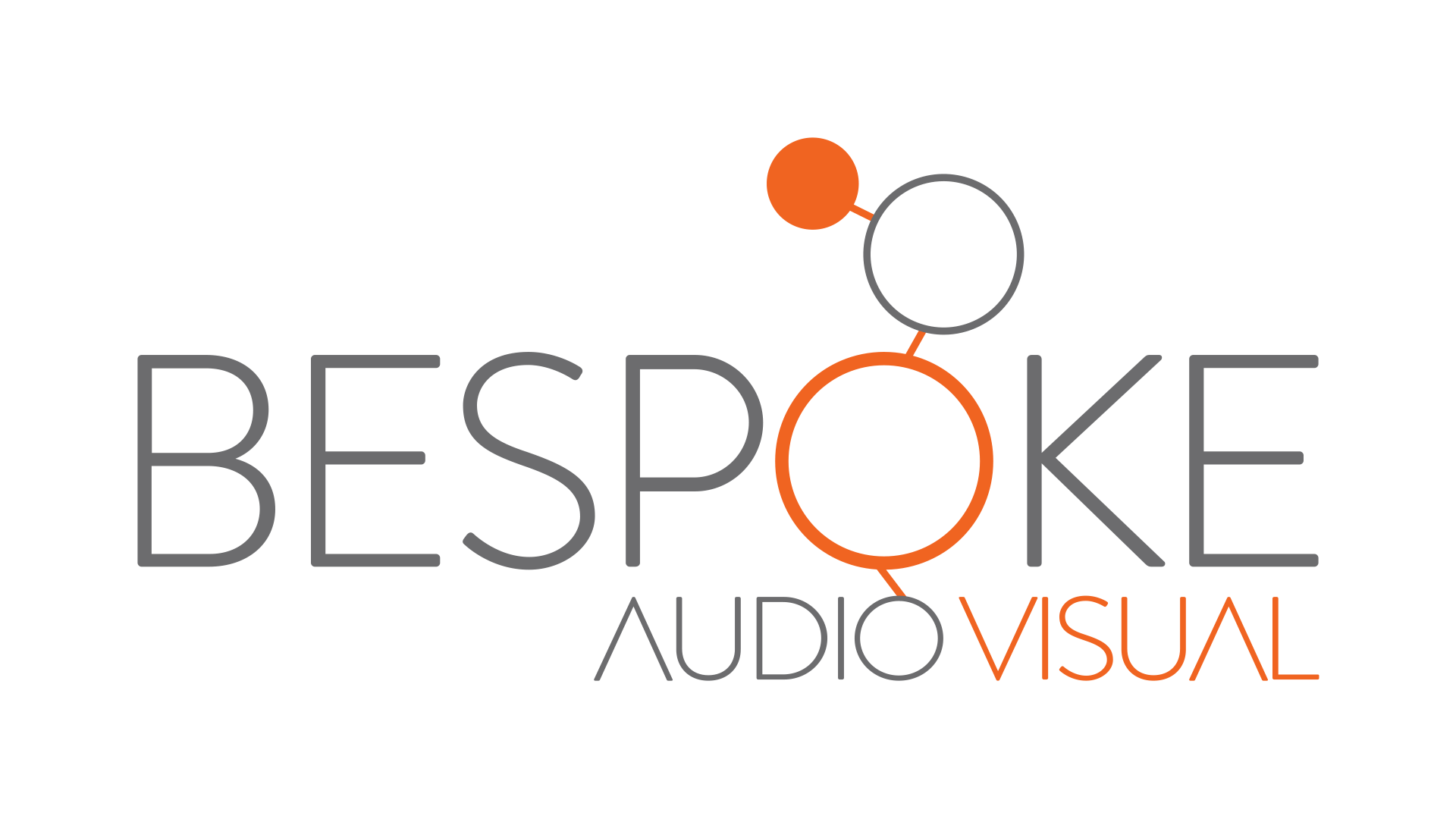 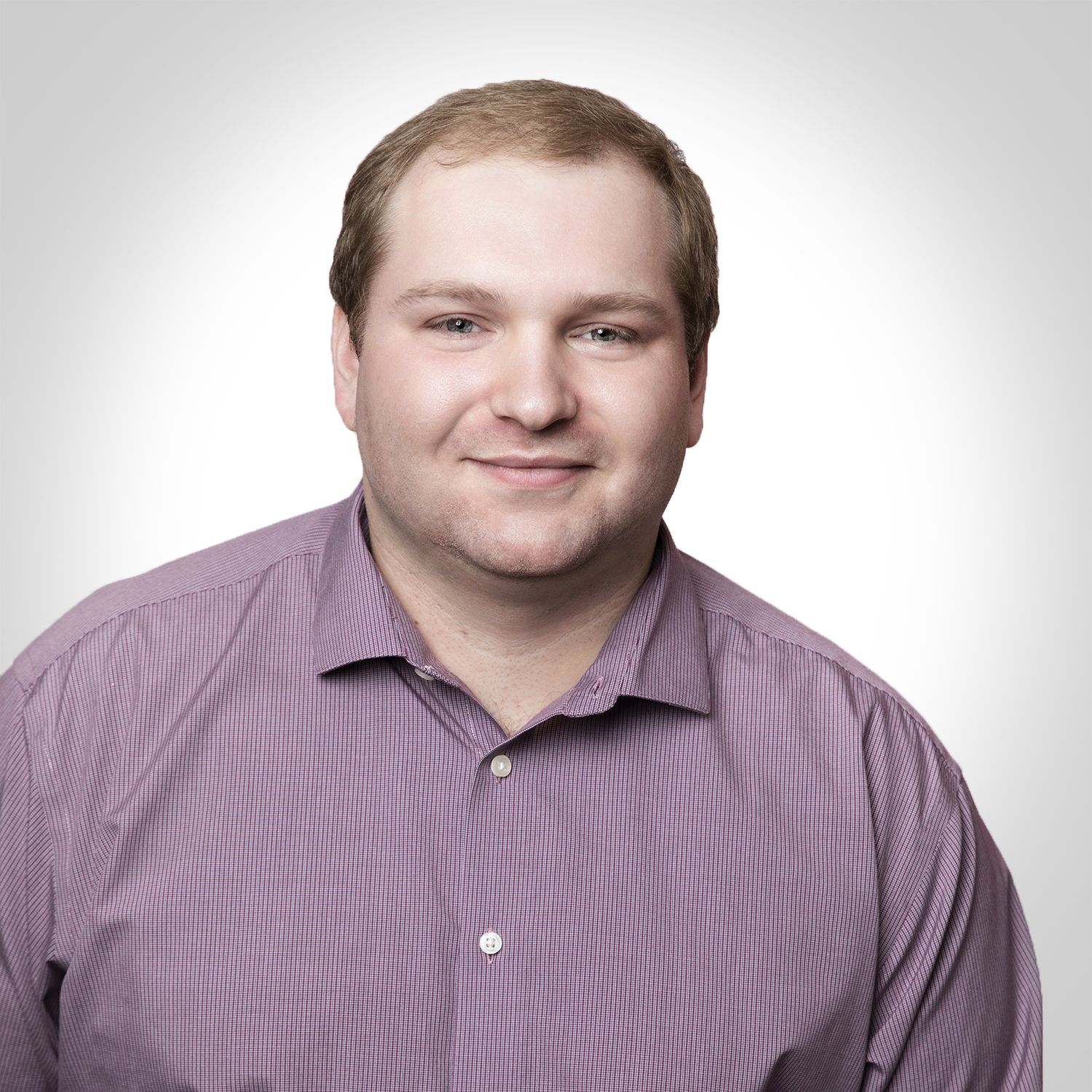