CAL: A Problem Solver in Quebec
Meyer Sound's Column Array Loudspeaker finds itself 'in a Class of it's Own'
30 July, 2020 by
GerrAudio Distribution Inc., Peter James

Providing the right tool for the job is critical for any audio upgrade, particularly in multi-purpose and acoustically challenging venues.  The equipment must satisfy the requirements of multiple user-groups and audio clarity, accuracy and aesthetics are often equally important.

As for Saint Joseph's Oratory of Mount Royal, one of Canada’s most popular tourist sites that draws over two million visitors annually, intelligibility was of top concern.  “Saint Joseph’s Oratory has the largest dome in Canada and second largest in the world, after Saint Peter’s Basilica in Rome.  Because of this, the reverberation time is very long which is fantastic for choir singing and organ music, but very challenging for spoken word application and live recital-type musical performances.”

In each case, CAL’s precise beam steering capabilities, superior sonic quality, reliability and slick aesthetic made the Meyer loudspeaker stand out as a perfect fit.

CAL pictured below at Saint Joseph's Oratory of Mount Royal 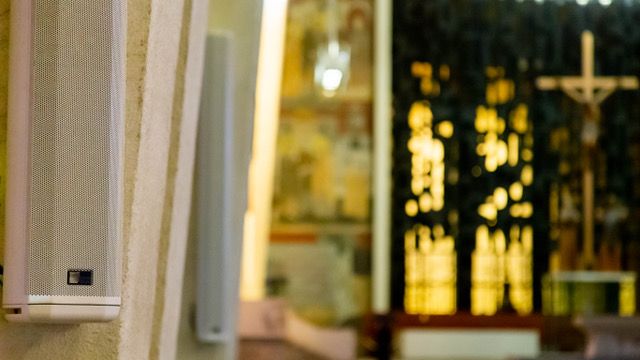 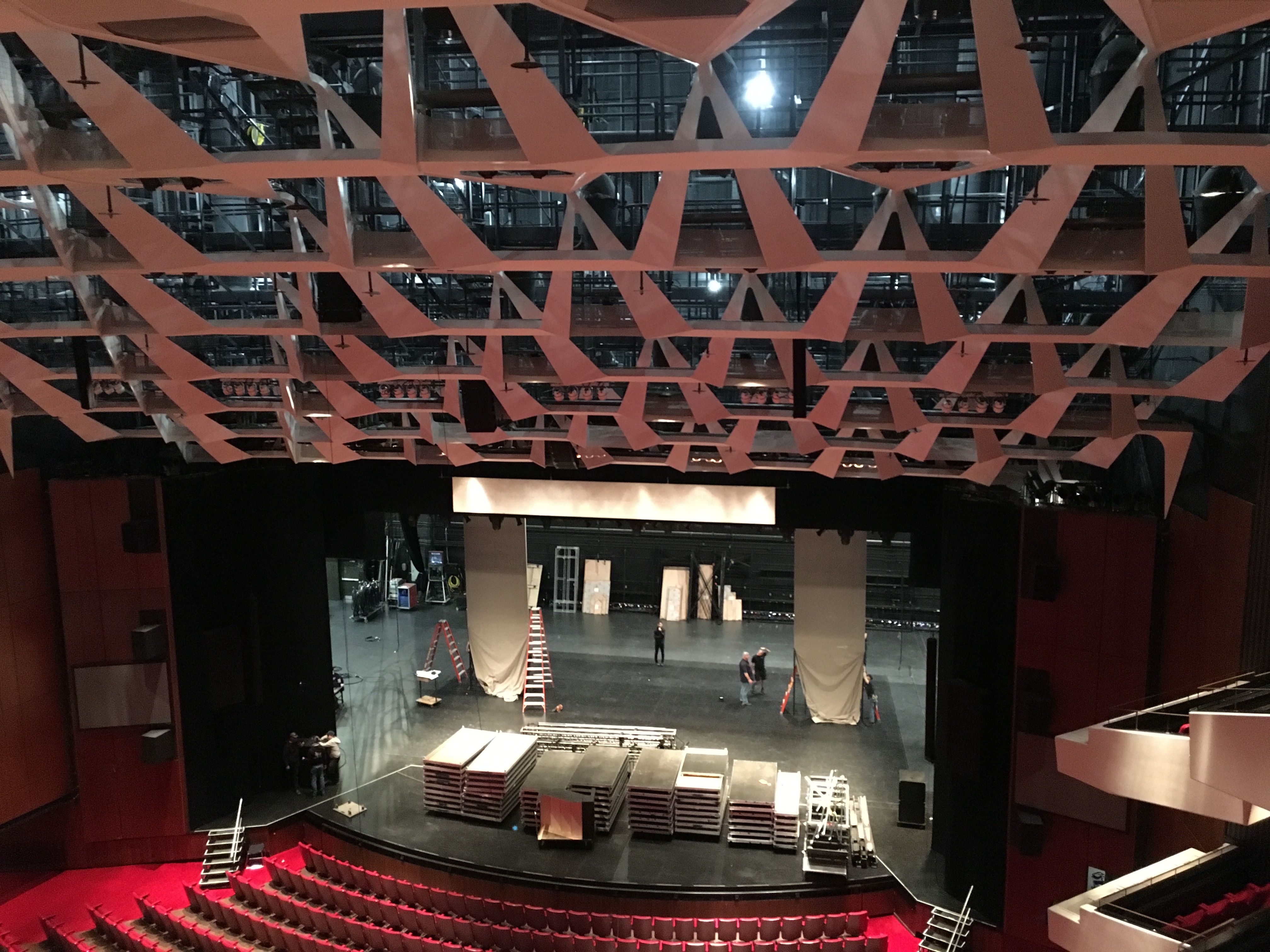 In addition to opera and dance performances, the 3,000-capacity venue hosts convocation ceremonies, musicals, and rock concerts.  Artists who have previously performed at the Wilfred Pelletier include the likes of Radiohead, Pavarotti, The Red Army Choir, Ella Fitzgerald, among many others.

In 2019, the Wilfred Pelletier underwent an audio upgrade for the system that is primarily used for ballet and opera performances, and those company’s specific needs were determining factors in the eventual installation of a system comprised of two CAL-96 units and three CAL-32s.

The choice was made following a ‘shoot-out’ between one CAL-96 and a competitor’s product, says Guy Levesque, Technical Manager for Stage Infrastructure and Equipment for Place des Arts. “After replacing the main PA in 2016, we made plans to replace the Opera system. The CAL system is perfect for opera-style production – very musical, often played at low levels with a natural mixing balance between the orchestra and the singers.”

Initially, the plan was to purchase three CAL loudspeaker units and repurpose Wilfrid Pelletier’s pre-existing Meyer M1D loudspeakers for balcony fill. “But we often use the M1Ds in other rooms in the venue, and as front-fills for the theatre’s main PA, so we decided that it would be best to have a standalone system that was dedicated to opera.

Solotech was the AV integrator on the project, whose competent team installed and commissioned the system comprising of one CAL-96 per side – hanging on the proscenium, one ceiling-mounted CAL-32 which serves as a main center cluster (pictured), and two additional CAL-32s which act as delays for balcony coverage. “This center cluster has two presets,” Levesque continues, “one for steering down into the first rows of seats when we don’t use the orchestra pit, and another configuration with a different beam steering arrangement to avoid the pit when it is in use."

La Société de la Place des Arts has a long relationship with GerrAudio, having previously purchased Meyer Sound, DiGiCo, Clear-Com and DPA products from the Canadian distributor.  “La Société de la Place des Arts manages five venues in downtown Montreal, as well as the 2000 to 6000-capacity Amphithéatre Fernand-Lindsay in Joliette, Quebec,” Levesque adds, “GerrAudio have great expertise and knowledge regarding the needs of both large and small venues. We like to work with a supplier who cares about our business.” 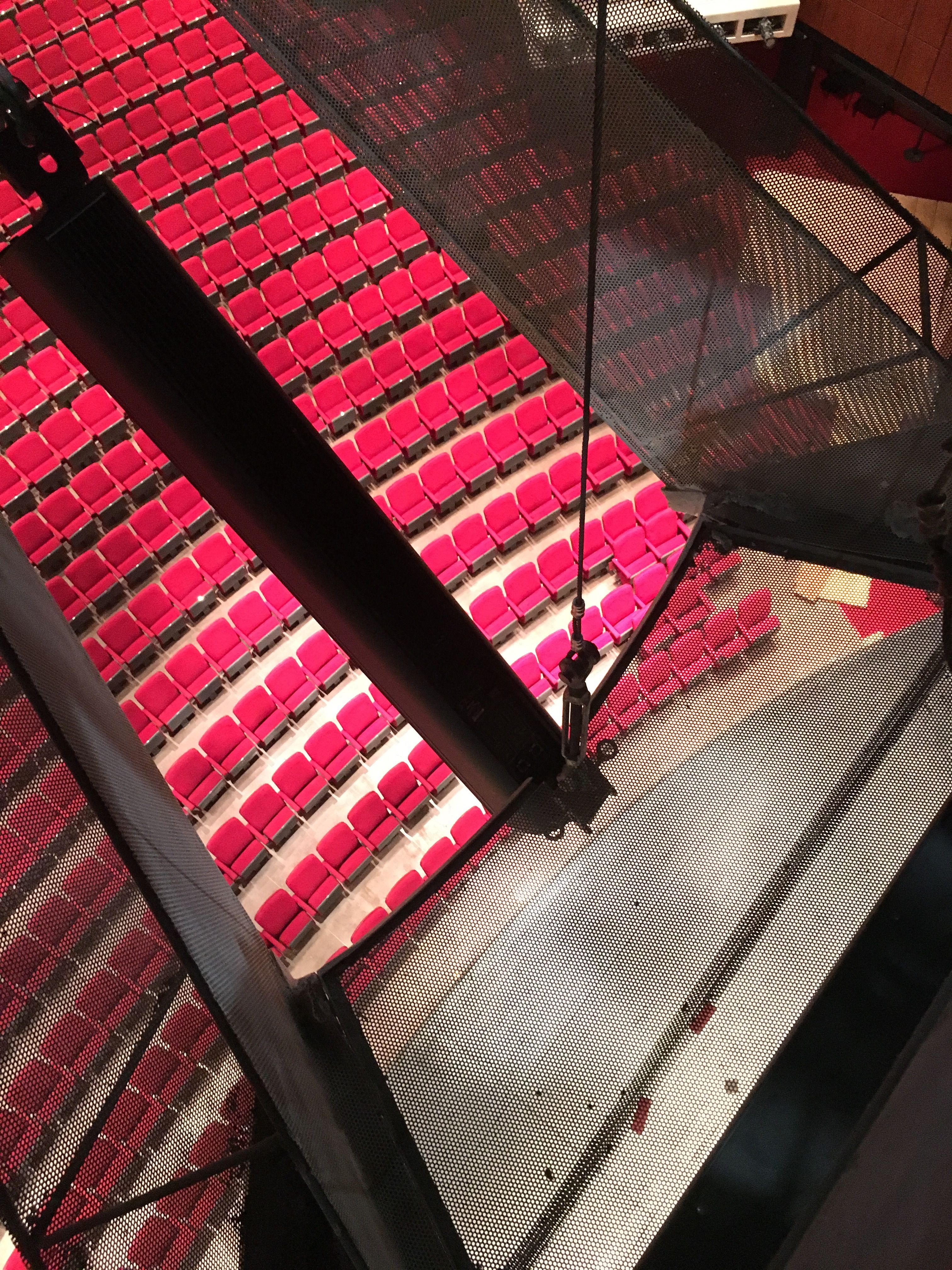 Founded in 1904, Saint Joseph’s Oratory is one of Montreal’s most beloved and architecturally striking sacred spaces. While it has hosted many spectacular events and performances over time, the new CAL system will be used primarily to enhance speech intelligibility during services and provide reinforcement for choirs and small instrumental ensembles.

Montreal’s RobinSon Productions has been the Oratory’s official AV supplier for a decade and, in that time, have acquired an in-depth understanding of the Oratory and all of its complexity, which ultimately led to the integration of Meyer’s CAL arrays with a new state-of-the-art audio control system.

The project was part of a massive modernization project that the Oratory underwent. In 2018, RobinSon was tasked with designing and implementing a new cutting-edge audio system to replace the church’s pre-existing, 25-year-old audio infrastructure.

To do so, RobinSon undertook a detailed and methodical comparative analysis of various loudspeaker options. During subsequent 3D acoustical simulations of their top choices: “It became clear that CAL was in a class of its own,” says RobinSon Project Manager, Gabriel Péloquin. “They’ve tried different sound systems, solutions and brands, but never with optimal results. During mass, hearing and understanding the priest is critical.” 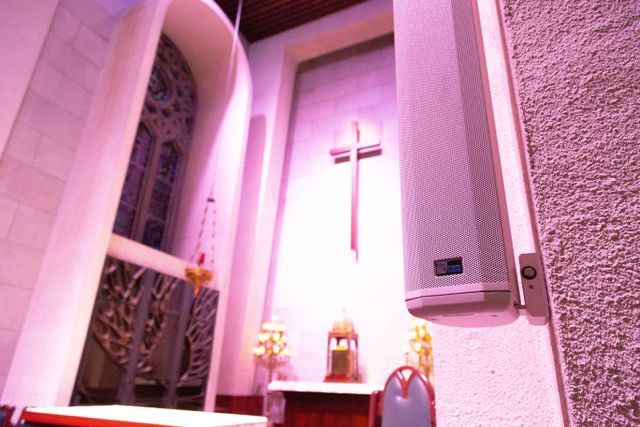 During a demonstration using just one CAL-64, RobinSon and GerrAudio proved the efficacy of the array in real time. “We aimed a beam of audio up into the ceiling so that the customer could hear the nasty effects that occur when sound reflects off of a hard surface and bounces back into an audience – out of time and with altered tonal characteristics. The demonstration worked well – it’s a very reverberant venue and intelligibility disappears quickly when the sound is not controlled,” Dany Legendre remarks. “Then we dropped the beam so it was aimed just on the crowd. After that, they were sold.”

In all, seven CAL units were installed; four CAL-64s cover the middle of the nave to the back of the space, two CAL-32s provide sound to a small chapel located to the left of the main sanctuary, and one CAL-32 is used for reinforcement in a small portion of the space near an entrance to the nave.

“Due to the sheer size of the basilica, the Meyer Sound CAL product was the only speaker option that delivered the power ratio needed to provide clear, powerful audio while minimizing visual distraction,” Péloquin says. “Having precise beam control minimizes the sound reflections on the stone walls which helps tremendously with speech intelligibility. The Basilica has a reverberation time of about seven seconds and adding treatment to the walls and ceiling was not possible, as it would have affected the sound of the organ and the aesthetics of the beautiful historic building.

“The client also noticed the excellent build quality of the CAL, which also influenced the decision,” Péloquin continues. “The integrated top and bottom shells on the speakers provide an impeccable finish and GerrAudio and Meyer Sound helped to colour-match the arrays to the walls, so they’re very unobtrusive and merge nicely into the background.”

With almost 300-feet between the speaker positions and the nearest equipment rack, having powered arrays saved significant costs and simplified the install dramatically. “We only needed to wire four cables to each speaker – one for power, an AES connection, an analog line for redundancy, and a Cat5 connection for preset recall and control.”

Using data sourced from architectural plan and on-site measurements taken by RobinSon’s team, they were also able to ensure seamless audio for the audience throughout the space – whether seated or standing.  Meyer’s proprietary Compass software was then used, and although minor EQ adjustments were made, Péloquin remarked: “Even with a dry EQ the sound was very impressive. We’re really pleased with the result.” 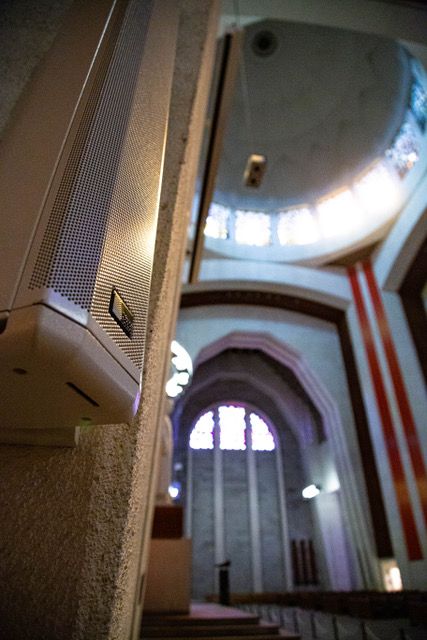 Les Francos de Montreal and Jazz Fest are world renowned, multi-stage festivals that generate significant cultural and economic benefits for the city, and draw artists and audiences from across the globe during the warmer Canadian months. Montreal en Lumière, however, takes place in February so CAL’s robust and durable construction played into the choice to deploy the Meyer loudspeakers, as well as sound quality and CAL’s ability to meet the diverse needs of each event.

CAL were first deployed for Montreal en Lumière in 2019. “It’s not a traditional music festival,” says Dan Meier, Technical Coordinator for Outdoor Venues and Event Production at L’Equipe Spectre (a local firm specializing in the design, management and production of large-scale events). “The main thing we were doing with the CAL for that festival was broadcasting ambient music throughout the site. The idea is to have really good coverage with music. It’s not meant to be loud, but it has to be present. Previously we were using a lot of small speakers, but the sound was never really good enough in my opinion. The CALs are small and discreet, so we tried them for ambient music, and it worked really well.” 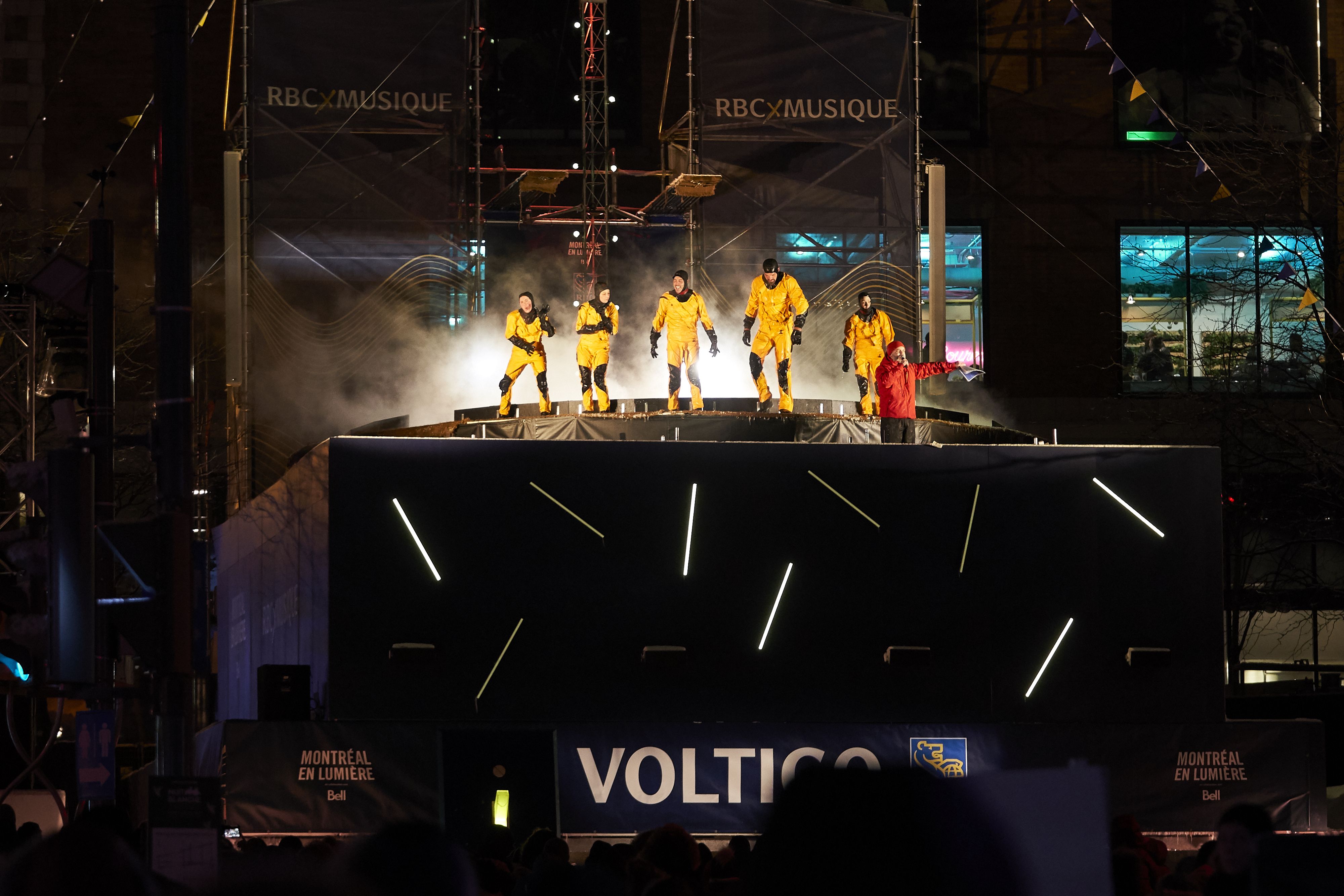 Conversely, Francos and Jazz Fest feature large-scale concerts on multiple stages. For the main stage, four CAL-96s and one CAL-32 are mounted on upright trusses as delay speakers to provide optimal sound imaging to the back of the audience. “Also, we try to keep as much of the energy as possible on the crowd and not outside of the audience zone. We’re working with the city and trying to limit noise pollution as much as possible.”

The CAL’s compact size and powerful beam steering capabilities were critical: “Big, black boxes are not liked by designers,” Meier says, “so I’m always negotiating with the various events’ designers and sponsors to get good real estate for the loudspeakers. The spots I’d like to have are often not available, but the CAL’s beam steering technology is really good and allows flexibility in placement without sacrificing audio quality.”

Working with GerrAudio and Meyer Sound, however, isn’t just about the right tools and audio solutions, it’s about people, Meier sums up: “I’ve known Dany Legendre for years – well before he joined GerrAudio. I’ve toured with him. I trust him. For me, it’s about people, service, and accountability. If he and GerrAudio tell me something is going to work, I know it’s going to work.” 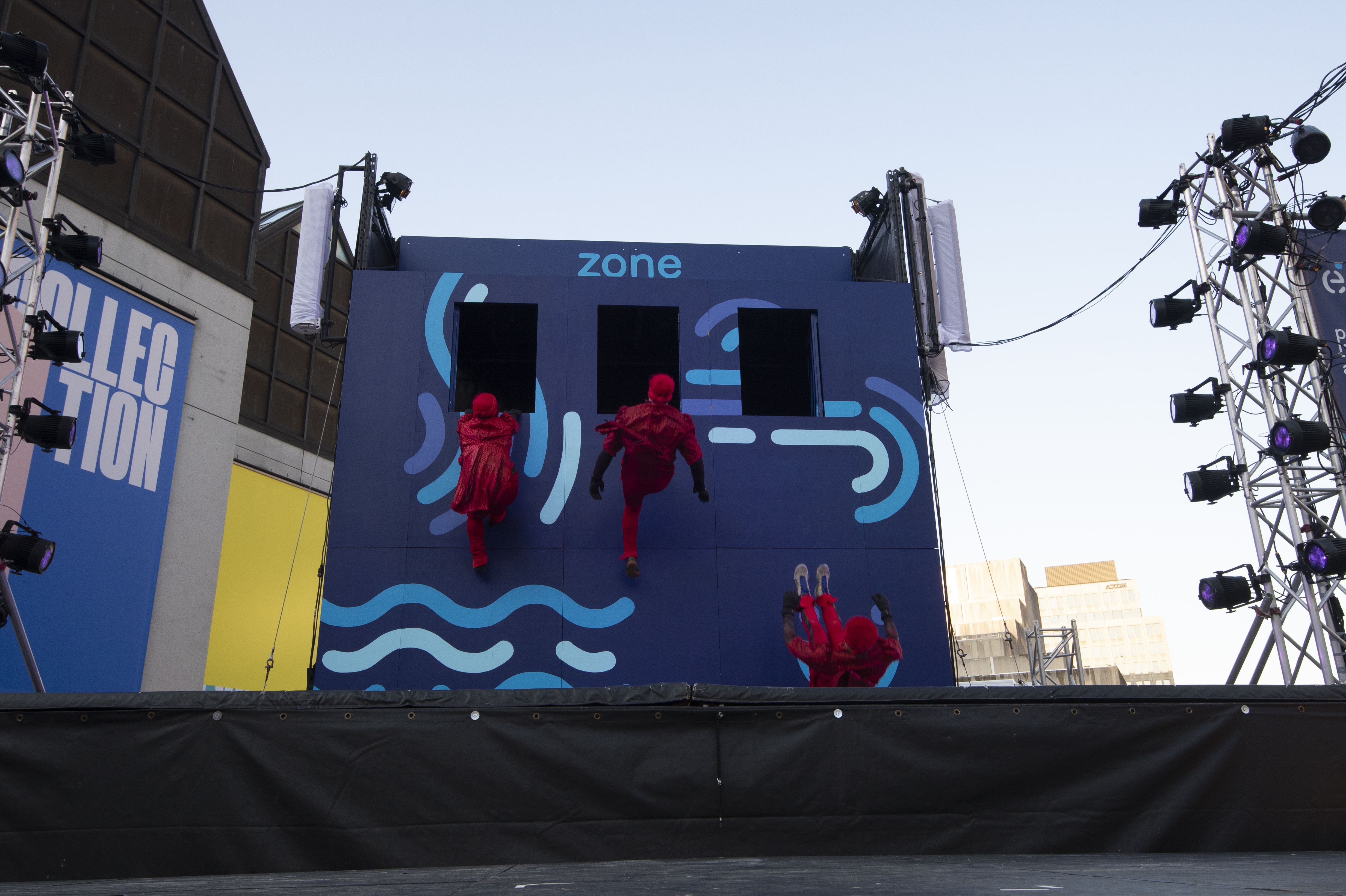 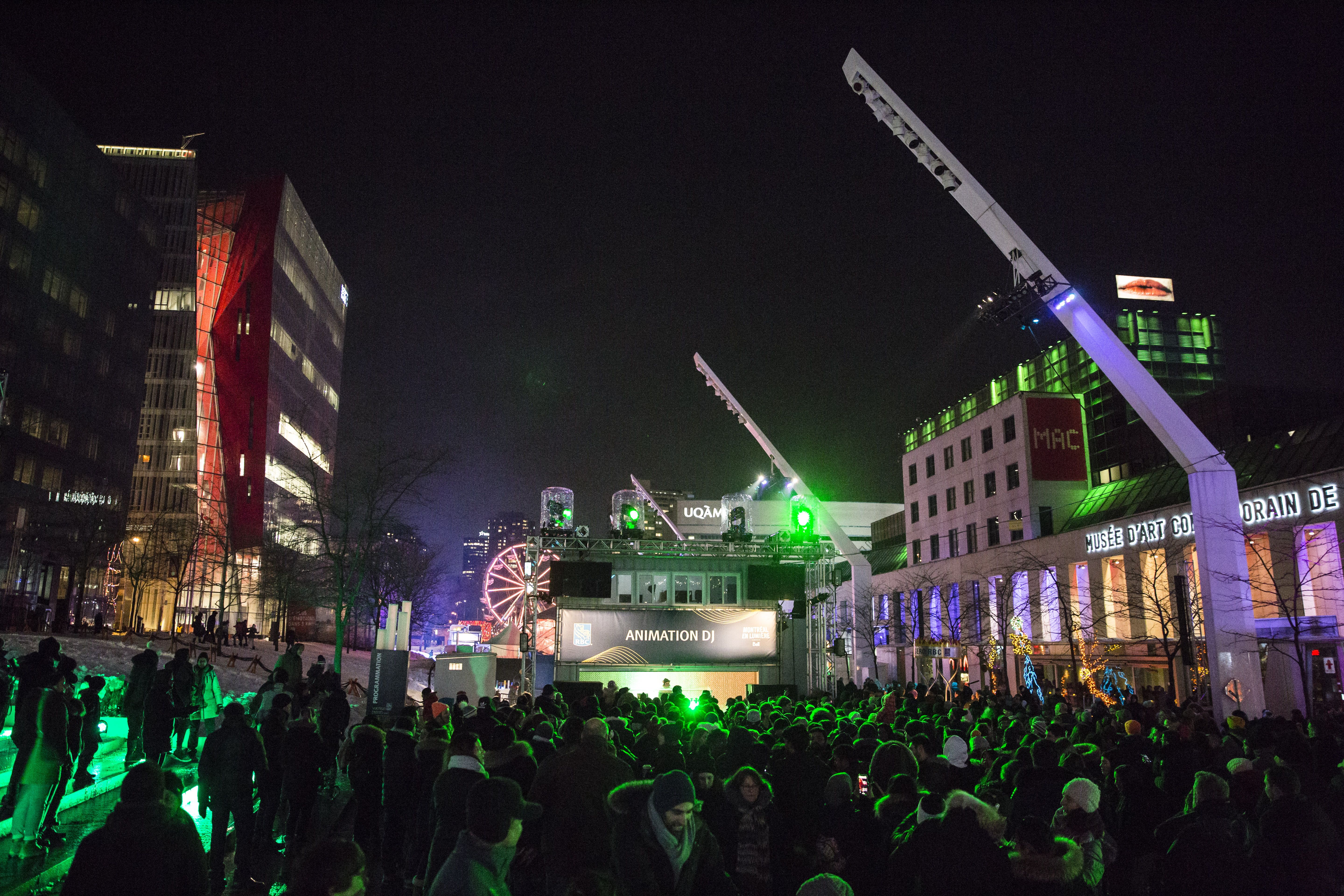 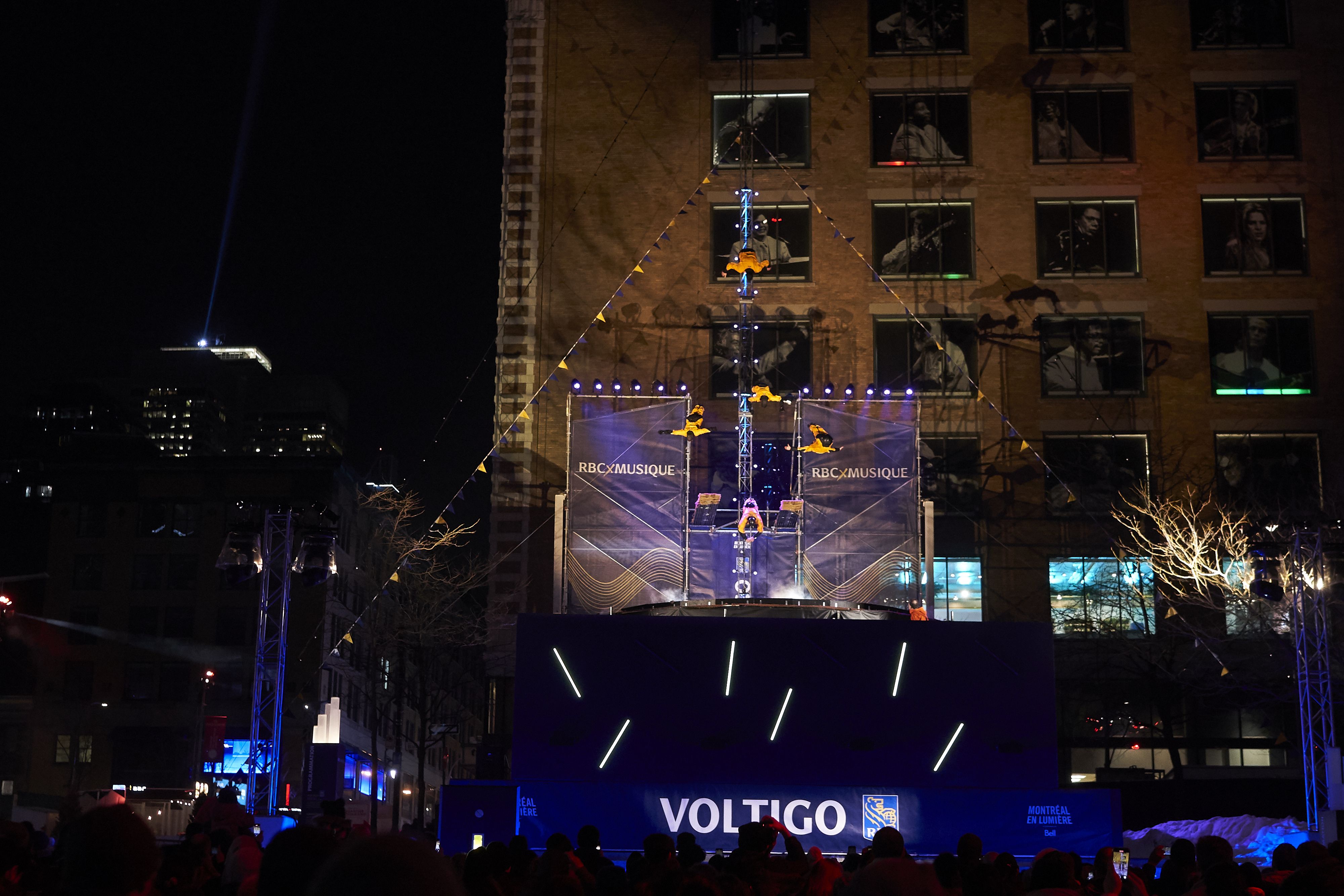