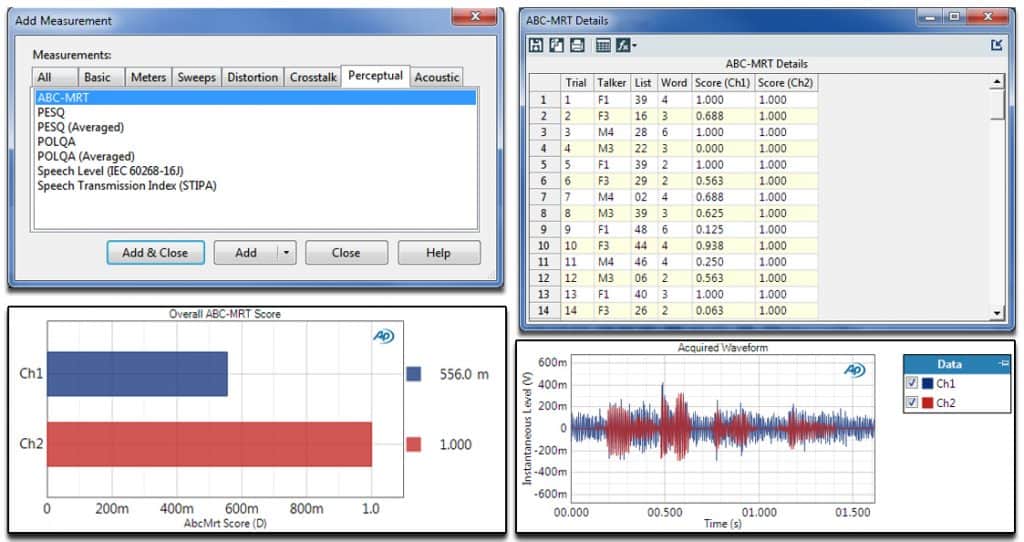 Introduction to ABC-MRT
ABC-MRT, or Articulation-Band Correlation Modified Rhyme Test, was developed by the Institute for Telecommunication Sciences (ITS) of the United States National Telecommunications and Information Administration (NTIA). It follows the paradigm of the Modified Rhyme Test, a technique for assessing speech intelligibility that involves subjective assessment by human subjects as detailed in ANSI/ASA Standard S3.2. To eliminate the time, complexity, and expense of the traditional human subject-based methodology, ABC-MRT uses a form of automatic speech recognition (ASR) to conduct an automated measurement that is closely correlated—greater than 95%—to a Modified Rhyme Test. An added benefit of ABC-MRT is its use of real speech (English only), allowing it to support the testing of systems that use noise suppression and/or codecs that only pass speech.

Integrated Audio, Electro-Acoustic and Intelligibility Measurement
Using the ABC-MRT option allows developers to measure the speech intelligibility of their designs with AP’s industry-leading instrumentation and use that same equipment for the rest of their audio and electro-acoustic test requirements. Once installed, the ABC-MRT measurement can be easily incorporated into any test sequence.

The ABC-MRT software option (APX-SW-ABC-MRT) is available now and retails for Ca$ 2,695. It requires APx500 audio measurement software release v4.5.2 (or later) and is compatible with all analyzers in the APx500 Series.

About Institute for Telecommunication Sciences (ITS)
The Institute for Telecommunication Sciences (ITS) performs cutting-edge telecommunications research and engineering with both federal government and private sector partners. As its research and engineering laboratory, ITS supports NTIA by performing the research and engineering that enables the U.S. Government, national and international standards organizations, and many aspects of private industry to manage the radio spectrum and ensure that innovative, new technologies are recognized and effective. ITS also serves as a principal Federal resource for solving the telecommunications concerns of other Federal agencies, state and local Governments, private corporations and associations, and international organizations. For further information on ITS and ABC-MRT, visit https://www.its.bldrdoc.gov/.