Toronto's Iconic Elgin & Winter Garden Theatre Upgrades with DiGiCo, Clear-Com and Glensound
"Ultimately, the new systems will better support the theatre's clients - whoever they may be, and whatever needs they may have.  Everybody here is really impressed and happy with the new setup, now I am just itching to get to use it!" - Robin Johnston, Head of Audio, Elgin & Winter Garden Theatre, Toronto, Ontario
6 October, 2021 by
GerrAudio Distribution Inc., Peter James

TORONTO, ONTARIO:  When it came to choosing DiGiCo’s new Quantum 338 to replace the previous console at Toronto’s historic Elgin & Winter Garden Theatre, Head of Sound, Robin Johnston, didn't hesitate. “Almost every musical and large show that’s come in here uses DiGiCo and I’ve used DiGiCo extensively for a decade – every console from the SD Series. We see a lot of SD10s, but the Quantum 338 obviously has more capabilities, so when it came time to upgrade, it seemed like the right fit.”

As an added value, Johnston’s choice of gear enabled him to work closely GerrAudio Distribution, whose founder, Bob Snelgrove, was instrumental in Johnston’s decision to take up audio professionally twenty years ago. “I started as a teenager when I moved to Toronto, attended Ryerson’s Theatre School, and worked at a few different venues before I got the job here in 2016. But I’ve known the folks at Gerr since I was 16 years old. I grew up in Brockville where they’re based and used to do lights for a professional theatre company there when I was in high school. Bob Snelgrove had a few products in the building, and I remember asking him about a Meyer Sound product. He gave me a bit of a history lesson and from then on, I was hooked; not only on the brands Gerr carries but the company they are. The knowledge and support they offer are second to none.”

His experience with Snelgrove and Gerr was a “game-changer,” Johnston continues: “It was a key moment. I knew I wanted to be in the business, and that pointed me towards audio. Bob was an early inspiration. And since then, whenever I was working at a venue that needed a new Clear-Com product or console, I’d send them to Gerr.”

It’s a relationship that’s always been helpful for Johnston, and all the more so since taking this current gig. “The support and the people there play a huge part in that. While these were the products we wanted, the fact they’re distributed by Gerr is fantastic because we know that anytime we have a question they’re just a call or a text away. They’re super supportive, so we know we’ll be good for the long haul.”

In fact, he adds, Gerr’s relationship with the Theatre dates back some forty years. “My understanding is that Gerr did a lot of the original installation when the building was renovated in the 1980s. So, they’ve been in here since day one.”

"GerrAudio and The Elgin Theatre have a rich history," puts in Bob Snelgrove, Founder and President of GerrAudio Distribution. "When the theatre went through its major restoration in 1987, GerrAudio - actually - it was Gerr Electro Acoustics at the time, was awarded the contract to build and install the audio and communication system infrastructure. This included the installation of a Meyer Sound system which remained in service for over twenty years," Snelgrove adds. "The fact that we are still servicing this iconic Toronto venue after over thirty years is humbling to me. We're thrilled with their addition of the new Quantum 338 and state-of-the-art intercom system from Clear-Com, and are confident that these systems from will serve the Elgin's needs for many years to come."

In speaking with Johnston, it’s clear that he has a passion for audio and for the venue itself, and understandably so. As venues go, the Elgin and Winter Garden Theatres are unique.

After being fully restored and renovated in the late 1980s, it went on to host everything from the world premiere of the Musical, Napoleon and the 1995 Toronto run of The Who’s Tommy musical to Christmas pantomimes, episodes of NBC’s Late Night With Conan O’Brien, the taping of Bryan Adams In Concert for PBS’ Great Performances, and many other events including photo and film shoots.

“The first big reno of the venue since ‘89, specifically with audio as part of the equation, was in 2011,” Johnston explains. “But what was put in then wasn’t sufficient enough to cover the evolving needs of the space.” Still, the venue’s pre-existing consoles served them well in the interim, he adds.

When the most recent opportunity to upgrade came up, Johnston knew that DiGiCo and Clear-Com would be a perfect solution to speak to their needs going forward. Beyond his preference for DiGiCo, Johnston says: “The important thing with the Quantum 338 is that it supports DMI Cards and therefore Dante. And because of that Rocknet installation in 2011 we have existing Cat 5e infrastructure throughout the building – two runs (in and out) to every panel. That worked perfectly for switching over to Dante because we now have a primary and secondary in every location for our console and Dante-enabled DQ-Racks. So, with the Q338 having that benefit, and the new DQ racks having just come out recently, it was a no-brainer we’d take that direction.”

DiGiCo’s ongoing support for legacy products and, as importantly, the cross-compatibility between older and newer consoles – a rarity in the realm of technology in general – also factored into Johnston’s decision. As a result, even if an engineer is coming in with little or no experience on the Quantum specifically, they’ll have an easier time adapting. “Absolutely,” Johnston says. “DiGiCo’s reliability and long-term support is proven. We’ve seen it. Between that and all the other benefits, it didn’t take a lot of thought. Not only are they my favourite consoles, but they’re also a good, future-proof choice.”

Typically, the venue’s Q338 will be used for FOH, he continues: “But if a show brings in a different console for FOH they can use the Q338 for monitors.” While currently there are no plans to replace the systems installed in 2011 in Winter Garden, he adds: “As soon as there’s another opportunity to upgrade I’m sure we’ll go in the same direction there as well.”

With the replacement of their previous wired Clear-Com system with a newer version in both theatres, and a new Clear-Com Freespeak II wireless system for the Elgin as a replacement for a different manufacturer’s product, benefits will be provided in both spaces. “Because all our systems are Clear-Com now; the way everything interfaces is seamless and effortless. I’ve got it wired into the network so I’m able to open my computer anywhere and do what I need to do; go in and reconfigure a belt pack for someone, check battery levels, or whatever. Also, previously we might get five hours battery life, now we’re getting eighteen hours.”

Like DiGiCo, Clear-Com is the de facto industry standard. “Every big musical that comes in uses Clear-Com, so I wanted to keep everything under that umbrella.”

As for GlenSound’s interface, it met their needs more simply and cost-effectively than other options: “In our basement patch/amp room we needed something to feed the amplifiers digitally from the Dante network – a product with at least 8 AES input/output channels. Gerr presented this amazing Glensound solution and it was effortless to set up; I just plugged it in, and it worked. But the whole system was like that. All I had to do was change a couple of network settings and we were done.”

At the end of the day, the upgrade dramatically increases the fluidity of workflow for Johnston and incoming engineers alike. “Before this, if I had another operator come in and they had to change or repatch something, it was more complicated than necessary. With the DiGiCo Quantum board, I know that every engineer who comes in will be comfortable. Across DiGiCo’s whole platform the operating system is very similar – plus or minus a few features here and there. If you know one of their consoles, you know them all. That was very attractive to us. It’s a perfect solution.”

Ultimately, the new systems will better support the theatre’s clients whoever they may be and whatever their specific needs are, Johnston concludes: “Especially repeat clients. Obviously, they’re going to have much better sound. When you go from our previous consoles which were made in 2005, to one made in 2020, there are clear sonic advantages, not to mention working at a higher sample rate. Overall, I think it gives the theatre an extra edge. Everybody here is really impressed and happy with the purchase. Now I’m just itching to get to use it.” 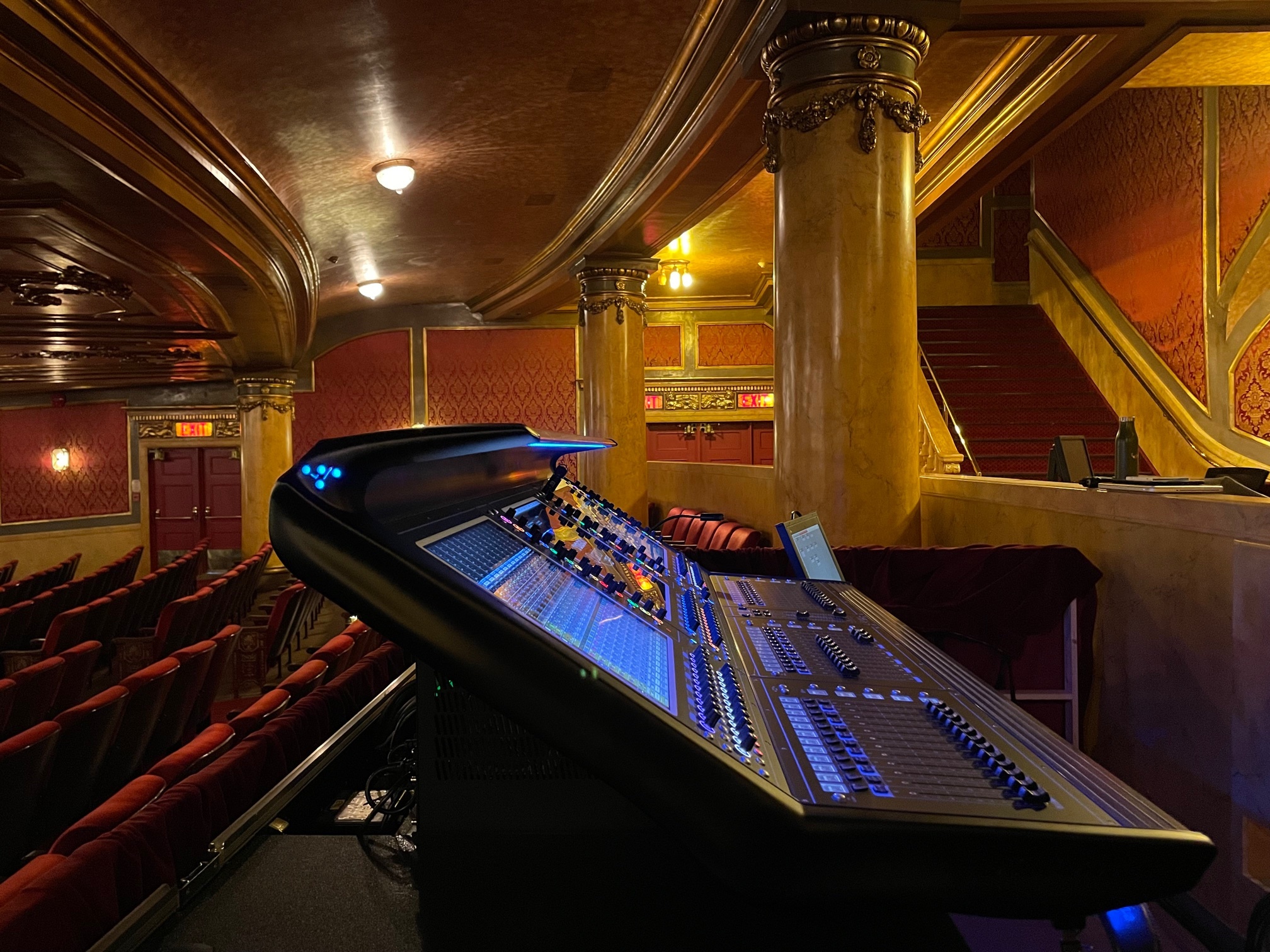 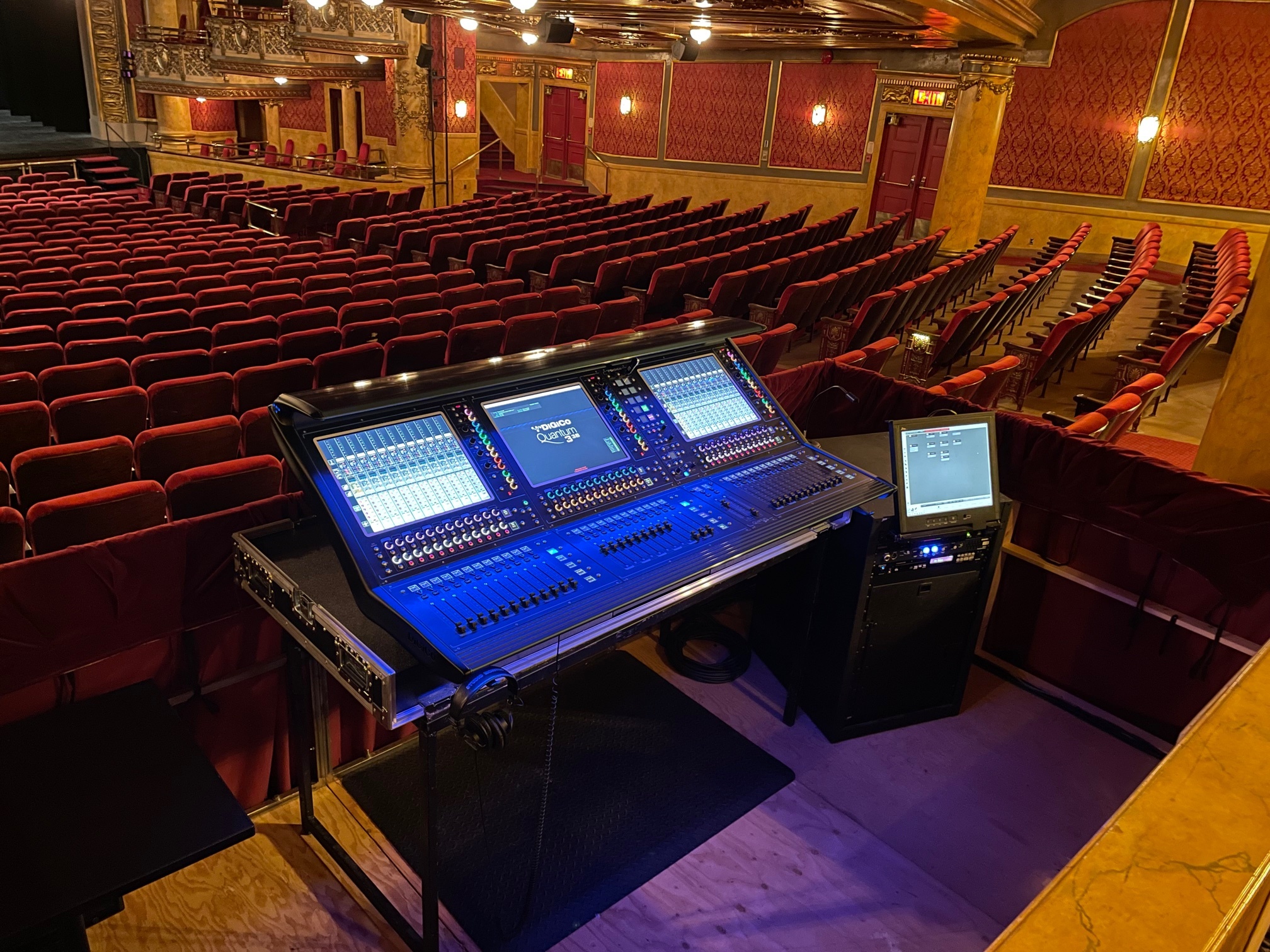 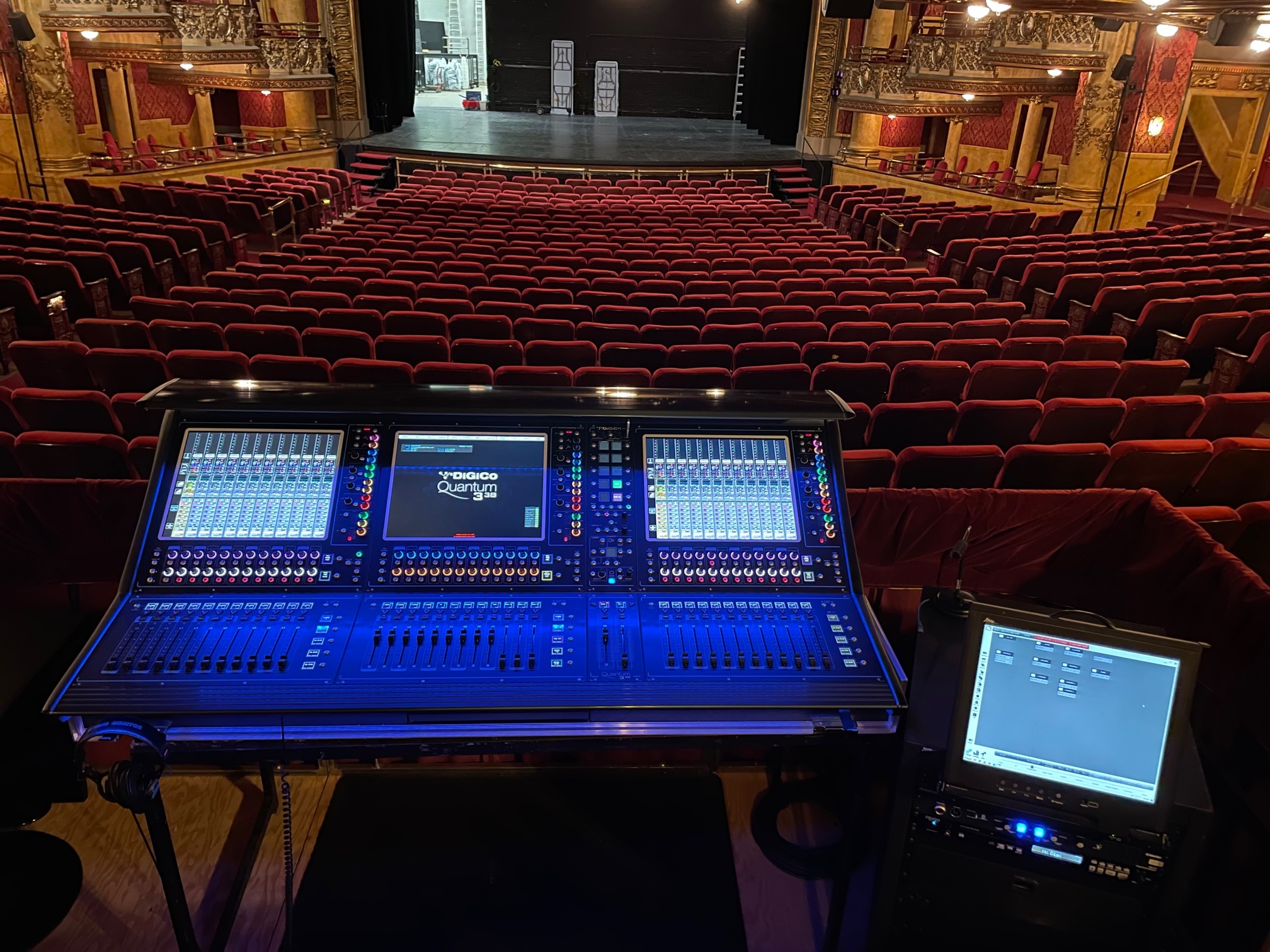 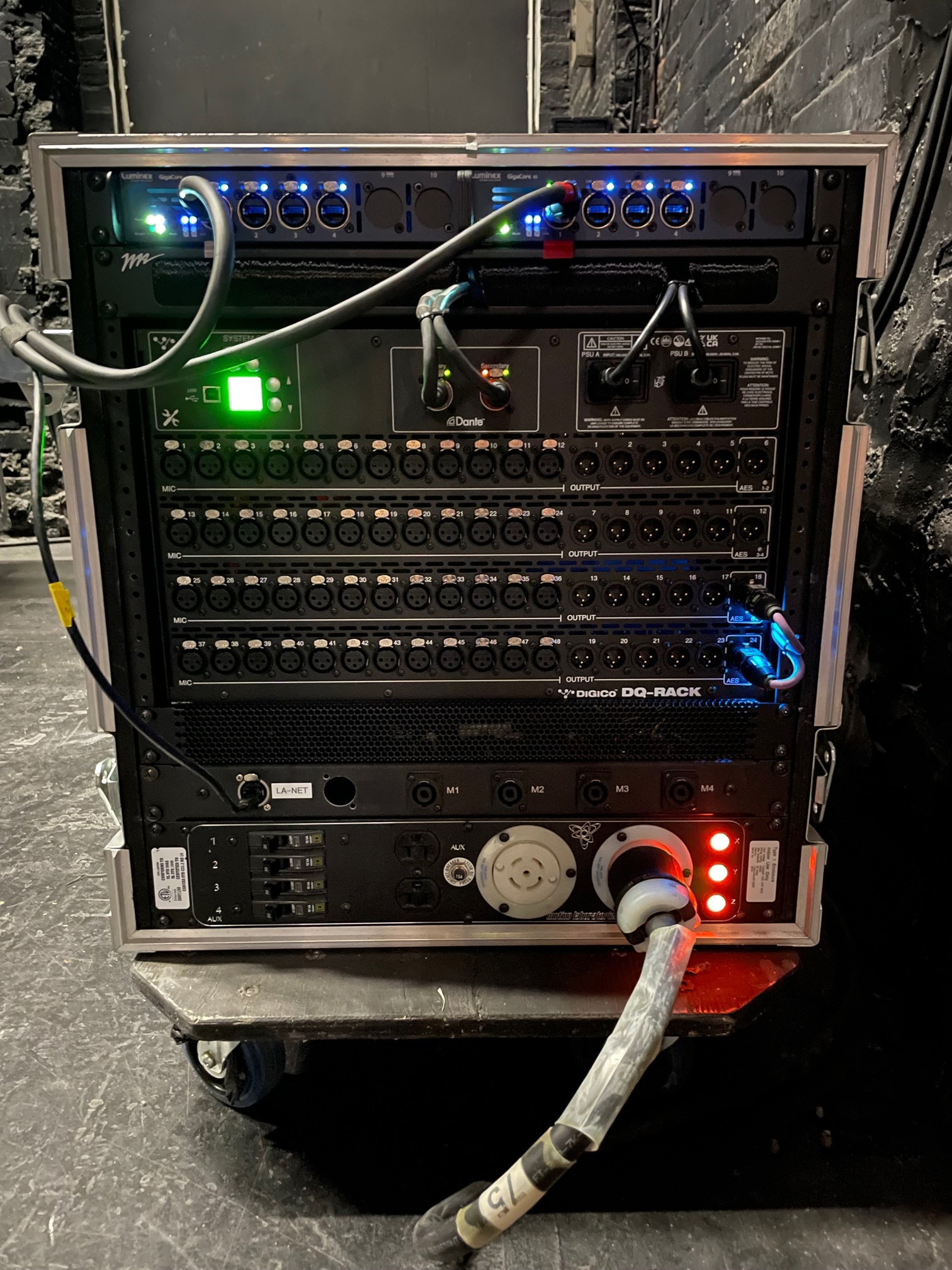 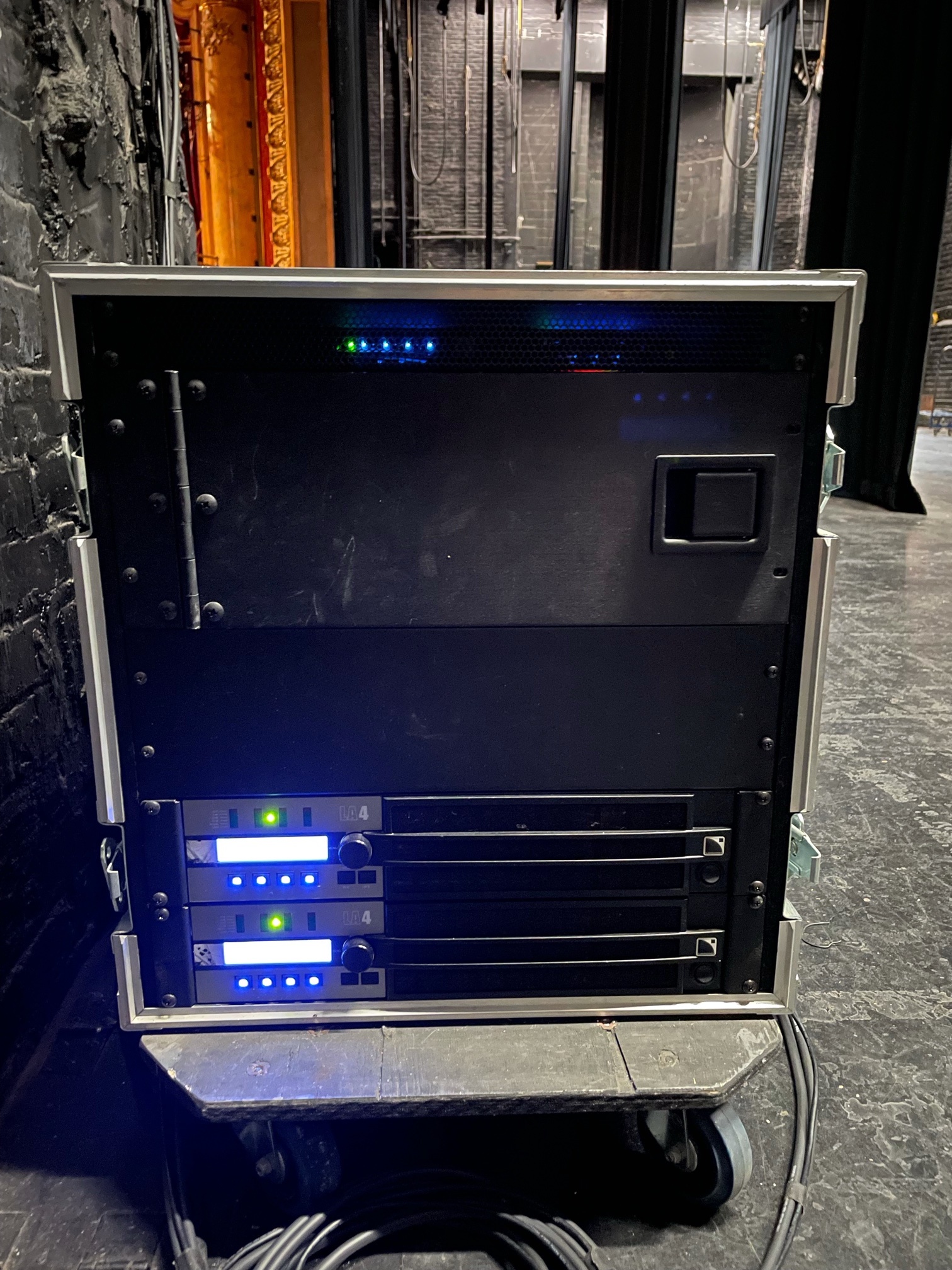 Previous Next
Previous Next
Read Next
Église Nouvelle Vie Audio Upgrades Include Latest Product Offerings from DiGiCO, KLANG and Clear-Com
"Our choice of DiGiCo was never in doubt.  Most of our technicians are volunteers, which is another reason why we have DiGiCo everywhere.  They can go to any of our sites and have a consistent workflow." - Patrice Clavette, Technical Director & Lead Sound Engineer, Nouvelle Vie